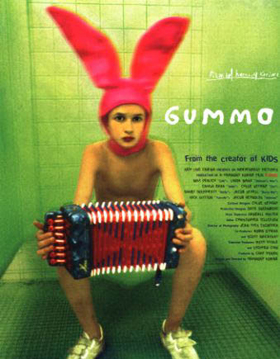 Gummo is a 1997 avant-garde independent film that serves as the directorial debut of Harmony Korine, who would later go on to direct films like Julien Donkey-Boy, Mister Lonely and Trash Humpers, and was heavily advertised for his past work as the writer of Kids.

It is set in the dying town of Xenia, Ohio, after a tornado wrecks it. (The real-life Xenia was indeed wrecked by a 1974 tornado.) Most of the residents have moved on to greener pastures, leaving only the poor, criminals, and the disabled.

The movie is very disturbing, with a constant feel of unease and disgust throughout. Both surreal and lifelike, Gummo is not for everyone. It's devoid of any typical film structure or really a climax, and often uses a mix of vignette-like footage and still images with narration to capture the residents' nihilistic, miserable lives.

The film only made back $100,000 of $1 million budget and divided critics, although its unorthodox style and graphic content did make for considerable press. The fans it did have were very vocal and in very high places (Werner Herzog, Gus Van Sant, Lukas Moodysson, etc.), and over time it has grown in status to now being regularly considered one of the most well-known Cult Classic films.

Not to be confused with the forgotten Marx Brother (who was actually the namesake for the film).