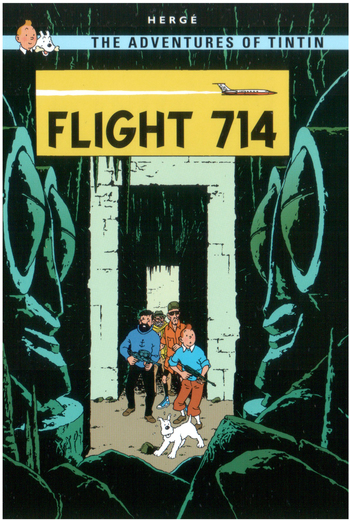 While making a stop in Jakarta on their way to a scientific conference in Sydney, Tintin, Haddock and Calculus happen to run into the former two's friend Piotr Skut, the Estonian pilot from "The Red Sea Sharks". He is currently the personal pilot of eccentric aircraft tycoon Lazlo Carreidas, "the millionaire who never laughs", whom he introduces to the rest. After Calculus inadvertently makes Carreidas laugh, twice, the latter decides to give them a lift to Sydney on his private jet. Due to that Spalding, Carreidas' assistant, decides to make a quick call to his accomplice to cancel their secret plan. However his accomplice refuses, even despite the fact that he seems to recognize Tintin from afar.
Advertisement:

Turns out that Splading's plan is to hijack the plane, with the two new replacement crew (whom the regulars end up in an "accident" with), and they succeed in this. They land on an abandoned volcanic island in the South Pacific and are held at gunpoint by armed gunmen who, to Tintin's horror, apparently kill Snowy. They are greeted by none other than Tintin's nemesis Rastapopoulos and The Dragon Allan. Having lost most of his fortune in his previous scheme, Rastapopoulos plans on stealing the money in Carreidas' Swiss Bank Account. To do this he hired the services of Dr. Krollspell, who has developed an experimental Truth Serum. Rastapopoulos and Krollspell take Carreidas away while the rest are held prisoner in a bunker. Eventually they escape with the help of Snowy, who turns out to be alive.

Fortunately, Krollspell's Truth Serum is completely worthless. It makes Carreidas start rattling off every misdeed he did in his life instead of answering Rastapopoulos' questions about Carreidas' bank account. Fed up with Carreidas' stories, Rastapopoulos angrily tries to hit Krollspell. However, Rastapopulos accidentally jabs himself with the needle, causing both him and Carreidas to bicker about each other's misdeeds to prove who's the most evil person. In the end, Rastapopoulos, Krollspell and the uncooperative Carreidas are Bound and Gagged by Tintin and Haddock. However, they are intercepted by Allan, after which Rastapopoulos escapes and orders Allan and his Mooks to find them. Knowing that Rastapopoulos plans to double cross him thanks to the Truth Serum, Krollspell decides to help Tintin's group and is freed after he tries to warn the group of Carriedas (who tries to run away) and Rastapopoulos' escape.

Then things get weird... Tintin suddenly starts hearing a "voice" directing them to a secret entrance of an ancient temple to evade their captors. There, they find a strange man named Mik Kanrokitoff, a writer for a space magazine. Apparently the island was visited in the past by Ancient Astronauts worshiped as gods by the natives. Mik himself possesses a device that allows him to communicate telepathically and maintains contact with the aforementioned race. While discussing this, Rastapopoulos' men set off explosives hoping to breach the temple which causes the volcano to awaken. Tintin and his friends are rescued by an honest-to-god Flying Saucer. They are then hypnotized into forgetting everything that happened. Meanwhile Rastapopoulos and his men try their luck by leaving the island via dinghy. However, they are also picked up by the Saucer with their fate unknown.

Tintin's group (apart from Krollspell, who was found in Cairo equally amnesic) then gives an interview claiming they don't remember a thing (apart from Snowy who, of course, cannot talk). Calculus however, shows a mysterious item he found in his pocket (which he had picked up inside the volcano) and claims that according to material analysis that is made of a material not found on Earth.

The story ends with Tintin, Haddock, and Calculus boarding a flight to the Sydney conference.