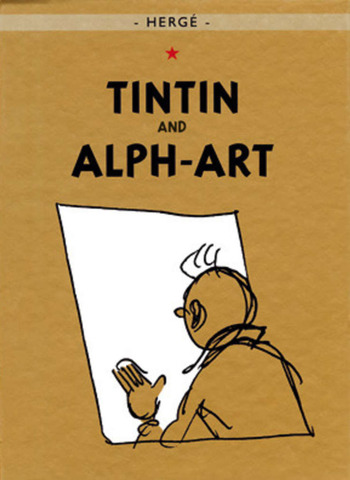 The 24th and final Tintin adventure, unfinished due to an unfortunate case of Died During Production. A selection of Hergé's unfinished sketches, accompanied by a transcript, was published in 1986.

An art craze sweeps over Europe - everyone is suddenly obsessed with Alph-Art, or statues of letters. Even the Captain buys an H, but Tintin remains skeptical of the movement. He looks into Alph-Art's origins, and finds his usual mess of crooks and swindlers (including Sakharine, Mr. Gibbons, Mr. Trickler, and Emir Ben Kalish Ezab) using Alph-Art as a cover for forgeries. However, he is eventually caught, and Hergé's last panel shows Tintin being marched away, to be covered with liquid polyester and sold off as a statue.