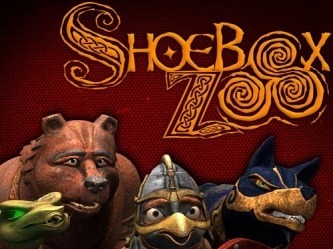 In every generation dawns a most auspicious day, the day when four elevens meet, and sleepers have their say. The day to which the fickle sands of time and tide have run. The day when fate and prophecy, reveal the chosen one.
Advertisement:

Shoebox Zoo is a fantasy children's show developed by The BBC in conjunction with various Canadian television companies. The series is a 26-episode series which ran from 2004 to 2005. Seemingly profiting off the live-action and CGI animated characters of fellow BBC-funded show Ace Lightning, the show involves a Scottish-American 11-year-old girl with major angst issues as she becomes involved in a fantasy world.

The plot involves 11-year-old Marnie McBride moving to Edinburgh, Scotland, with her father to live a new life after her mother, Rosemary, died of unknown causes, and hasn't really gotten over her passing yet. On her 11th birthday, Marnie and her dad, Ross, visit an old junk shop where the elderly bearded shopkeeper gives Marnie an old shoebox containing four toy animals that are in no way alive. However, it turns out that they are alive and are over 1,100 years old.

The show's intricate backstory is revealed, that the four toys — Edwin, Bruno, Ailsa and Wolfgang — are all scholars trapped within their toy forms after stealing the Book of Forbidden Knowledge from their mentor, the great wizard Michael Scot (actually based on a real philosopher and mathematician). Only The Chosen One has the power to awaken the toys from their slumber, and must find the Book to reverse the spell used on them. But stalking Marnie from the shadows is the evil, bald magician Toledo the Shapeshifter, who plans to use the Book's dark magic to Take Over the World. Marnie is quickly thrown into the deep end, dealing with the magical world she discovers, her school life and slowly developing trauma of losing her mother, which lingers for quite some time.

A second season was commissioned after the success of the first, involving Marnie and pals going to the United States after they make a big discovery about the Book. Marnie's emotional journey continues as she looks for the Book while Toledo initiates a second prophecy with the coming of the Dawn Queen, using Demonic Possession to control the Dawn Queen's avatar Aurora Dexter to find the Book. There are numerous casualties along the way, with Marnie taking a brief walk on The Dark Side. The show eventually ends on a No MacGuffin, No Winner, ending with the hint of future events beyond the show's end, although no one seems to have been bothered to continue the show's story.

The show appeared to have a rather decent fanbase which had circulated around its (now defunct) Web site, but now the whole fandom has vanished without a trace...