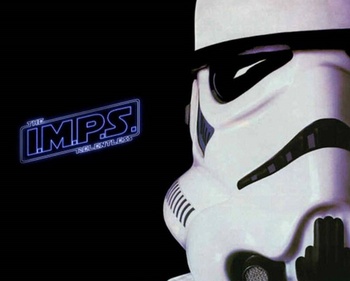 It is the greatest military force the galaxy has ever known.
With histories upheld by tradition. Integrity. Honor.
They are revered by their allies, feared by their enemies. Respected by all.
You know their origins. You know the legacy. And you think you know the story.
But there's one you haven't heard. And it's told by those with the best damn job in the galaxy.
Teaser Trailer, and cue the epic music.

An ongoing Fan Film series set in the Star Wars universe, Imperial Military Personnel Stories: The Relentless (abbreviated I.M.P.S: The Relentless) acts as an epic documentary of the careers of the men and women serving aboard the titular Revenge Class Battle Carrier, Relentless. Portrays The Empire in a positive light. And when we say epic, we mean epic.

The first part of the series was released in 2005 by some of the makers of TROOPS, and was a groundbreaking short film noted for its visuals, narration, and soundtrack. However, following the initial release, the series suddenly dropped off the map, and the series was presumed dead. However, in 2009, the second episode was released with a vengeance, and production has taken an upswing, with the third installment due in 2011. The third stalled out when it was mostly done except for sound editing and was not released until 2018.

The series, as noted, follows the careers of soldiers serving aboard the Relentless, with each episode focusing on a different division of soldiers. The first episode focused on the street patrols of the Rail Runners stormtrooper squadron, while the second episode is based off the exploits of the Snowtroopers and their armored assault brigades. The series structure plays as a fictional documentary style video taking inspiration from real world naval carrier documentaries, except with Star Wars.

You can start watching the series here

I.M.P.S: The Relentless contains examples of: