Literature / The Pillars of the Earth 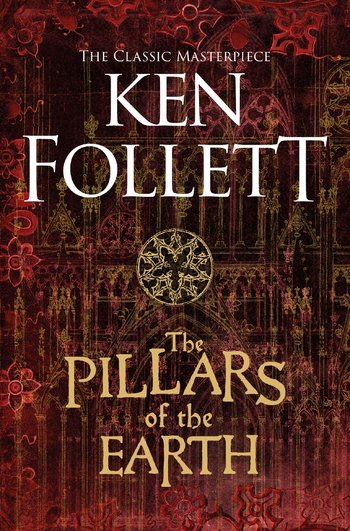 An epic novel, published in 1989 and set in 12th century England, The Pillars of the Earth is the chronicle of a man, his family, their enemies and the extraordinary dream that consumes them all. It is by far the most popular story that Ken Follett, mainly an author of thrillers and various spy novels, has ever written.

Tom Builder is a poor stonemason who dreams of building something that will be his legacy and which will sustain his family for the rest of their lives. Philip, the Prior of Kingsbridge, fights to build a cathedral there, against the wishes of his Bishop, his Lord and all manner of political enemies.

The Gothic Cathedral at Kingsbridge, it turns out, becomes more important than anyone imagines. Woven throughout this deeply personal drama are the civil wars between King Stephen and Queen Maud, and later the machinations of King Henry II and the priest Thomas Becket.

He followed it up with two sequels and one prequel many years later: World Without End, which picks up with the characters' descendants in the same village in 1327, A Column Of Fire, beginning in 1558, and The Evening And The Morning, set in the tenth century. Also adapted, along with World Without End, into a popular Euro Board Game, and a Video Game developed by Daedalic Entertainment and were released in 3 parts.

The original novel contains examples of: