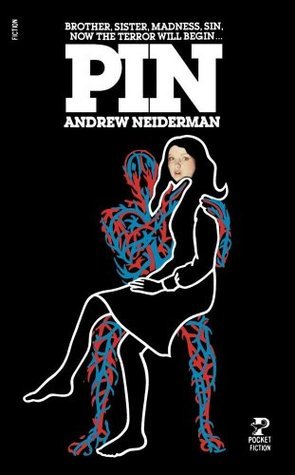 Pin is a 1981 horror/psychological thriller by Andrew Neiderman (who would later become the ghostwriter for V. C. Andrews).

Teenage siblings Leon and Ursula live in a Big Fancy House with their clinically detached doctor-dad, who explains everything—including his love for his children—in strictly scientific terms, and their deeply neurotic mother who is obsessed with cleanliness and seldom leaves the home. With such remote, unreachable parents, it's no wonder that Leon and Ursula grow unusually close, turning to each other for support, comfort, and...all kinds of things.

Then of course, there's Pin, the life-size, grotesque anatomical model that once occupied their father's office, his veins and organs visible through his clear plastic skin, who comes to live with Leon and Ursula when their mother and father die unexpectedly. Pin has always been there for the children. Pin is wise, calm, analytical. Pin gives wonderful advice. Pin is always right and always knows exactly what to do. Leon wants to be just like Pin.

Ursula only wants to escape and live a normal life. But Pin doesn't like that. Neither does Leon.

Pin has a plan that will allow the three of them to stay together, forever. All Leon has to do is obey him.

Pin was adapted into a fairly close-to-the-book film in 1988.