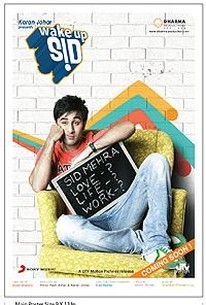 Wake Up Sid is a 2009 Bollywood movie directed by newcomer Ayan Mukherji, produced by Karan Johar, and starring Ranbir Kapoor and Konkona Sen Sharma. The low-key plot follows spoiled rich kid Sid Mehra's attempts to mature and make his way in the world after his parents cut him off from the family wealth. During this time he befriends and becomes the roommate of Aisha, a determined young woman, who is similarly trying to find a career in Mumbai. Together they deal with the issues that arise from living together, find jobs they are content with and come to terms with their growing romantic attraction to one another.

A successful movie in India, it is a good showcase for the acting skills of both leads as well as some new trends in Bollywood in general.