Literature / The Scarecrow of Oz 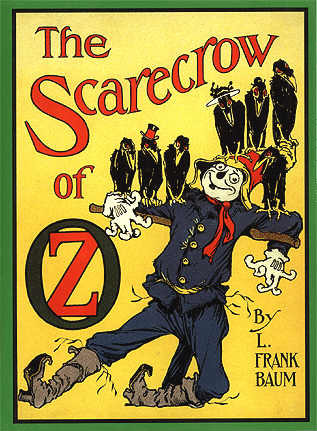 The Scarecrow of Oz is the ninth book in L. Frank Baum's Land of Oz book series. Published on 6 June 1915, it was Baum's admitted favorite among his Oz books.

The book follows the adventures of Trot and Cap'n Bill, who previously appeared in two of Baum's fantasy books outside of the Oz series, The Sea Fairies and Sky Island. The two of them are swallowed by the sea in a rowboat and deposited in an underwater cave where they encounter Flipper the Ork, a bird-like Mix And Match Creature. After escaping a long cave system they end up emerging onto an island inhabited by a lone hermit named Pessim. On the island are berries that can change the size of those who eat them, so Trot and Cap'n Bill shrink themselves to enable the Ork to carry them. They then end up in the Land of Mo, as seen in Baum's previous book The Magical Monarch of Mo, where they find Button Bright (whom they previously adventured with in Sky Island), and after a brief stay the Ork flies them across the Deadly Desert into Oz.

When they reach Oz, they descend in an isolated micronation known as Jinxland ruled by the corrupt King Krewl, who wants to marry off the rightful Princess Gloria to a decrepit noble named Googly-Goo, though she is in love with the gardener boy Pon. Krewl commissions the evil witch Blinkie to freeze Gloria's heart, and when Cap'n Bill tries to intervene she turns him into a grasshopper. Glinda the Good later gets wind of this situation in her Book of Records, and decides the only one who can remedy the situation is the Scarecrow.

The 1914 film version, His Majesty, The Scarecrow of Oz, actually came out before the book, technically making this a Novelization of sorts, although it differs from the film in many ways. There is some speculation that the novel was also partially recycled from an unfinished third Trot and Cap'n Bill book that wasn't originally going to involve Oz at all; given that no Oz character appears until over halfway through the book, it is an easy speculation to make. However, it is unconfirmed, with no surviving manuscripts or official word from Baum. This was most certainly the case with the next book Rinkitink In Oz, which really was a recycled manuscript that Baum turned into an Oz book.

The Scarecrow of Oz provides examples of: