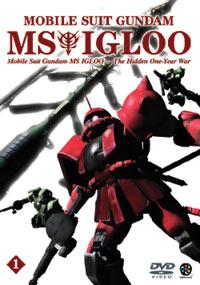 Mobile Suit Gundam MS IGLOO is a CGI Gundam feature which takes place during the One Year War. Three series have been released under the title, each one three episodes long:

The director of MS IGLOO is Takashi Imanishi (previously directed Mobile Suit Gundam 0083: Stardust Memory), and Yutaka Izubuchi is the supervisor. There is also a manga series, MS IGLOO 603, which started as an adaptation of The Hidden One Year War but later added its own content.