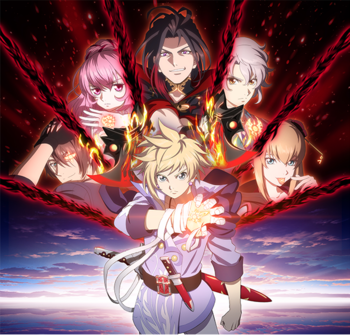 Live. Even if it's a sin.
Clockwise from top: Vicious, Aegis Alver, Yuna Azetta, Kanata Hjuger, Orwin Granberg, Misella.
In the world of Crestoria, every human is born with a Vision Orb which allows the user to record someone's transgressions and broadcast said person's crime throughout the region. If public opinion deems the suspect guilty, their vision orb merges into their body and becomes a "Stain of Guilt", marking them for punishment by a mysterious group called the "Enforcers".
Advertisement:

Kanata Hjuger, a young man working at an orphanage run by his father Cody, discovers the dark side of the system when he gets branded with a Stain of Guilt after he ends up discovering that his father runs a human trafficking ring—and ends up killing him when he finds out that Misella, a childhood friend and one of the orphans, is to be sold off to an arranged marriage. Kanata and Misella are forced to flee from the Enforcers but are soon saved by Vicious, a mysterious man known as the "Great Transgressor" for his reputation as a ruthless criminal, who turns his—and eventually Misella's—Stains into weapons known as a "Blood Sin". The three eventually form an unlikely band of fellow outcasts, including Aegis Alva, a knight initially tasked with hunting down Kanata but soon finds himself in trouble over an unrequited love; Yuna Azetta, an information trader with a penchant for lying and a mission to find someone; and Orwin Granberg, a world-weary family man.

Tales of Crestoria is the fourth mobile spin-off title in the Tales Series. Taking inspiration from other popular mobile games, Crestoria is a turn based RPG rather than an Action RPG like the series it hails from. Characters have two moves they can perform besides attacking, and the highest rarity characters can use Mystic Artes. The game uses Memoria Stones as a secondary summonable item that acts as equipment for characters as well.

On December 7th, 2021, it was announced that all of the servers would be shut down on February 7th, 2022. Unlike past spin off titles, the setting and characters are considered as important as mainline titles, and are expected to reappear in later works.

On December 15th, 2021, it was announced a manga adaption of the game, which will conclude its story. Jun Kumagai will draw the scenario, while the artist Tsubaki Ayasugu will illustrate the characters.

The short animation, TALES OF CRESTORIAーTHE WAKE OF SINー that covers the first chapter of the story was released on October 18th, 2020 on YouTube.

Identify the tropes. Even if it's a sin.