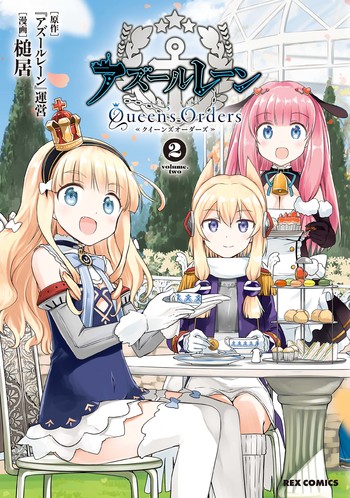 I am the super-dreadnought of the royal navy, make sure to remember my name! My military results? I let my servants take care of those kinds of things, and I just need to watch as they achieve them!
Advertisement:

A queen is a symbol to her people, a queen represents authority and nobility, and a queen most definitely takes charge and serves the people, even if it means not being able to take a little bit of tea time. That is the life of Queen Elizabeth.... or should be.

Having arrived at the Azur Lane base, Warspite bows before her Queen, vowing to be a great aide to her. Much to her disappointment, Elizabeth does not befit the ideals of a true Queen unless one considers being bratty, selfish, pompous, and overall lazy to be good qualities.

Suddenly, tragedy strikes as the Commander collapses, his body giving out after the massive workload placed on him proves too much. With the only ones that know his condition being Queen Elizabeth, Warspite, and a small few and not wanting everyone to lose morale if this knowledge were to brought to light (or, more seriously, risk having the Commander transferred away and have a new one assigned), Elizabeth elects to maintain the secret.

Now, our cute little monarch must fulfill all of her beloved Commander's duties (or at least make an attempt before passing them on to Warspite), all the while preventing anyone from learning about what happened to the Commander. Along the way, she and Warspite discover that some individuals are just as much in love with the Commander as she is, and they are all too keen to take her job as Secretary ship.

Azur Lane: Queen's Orders is a manga written by Tsuchii, based on the Azur Lane series first published on 26 October 2018.

The manga contains the following tropes: