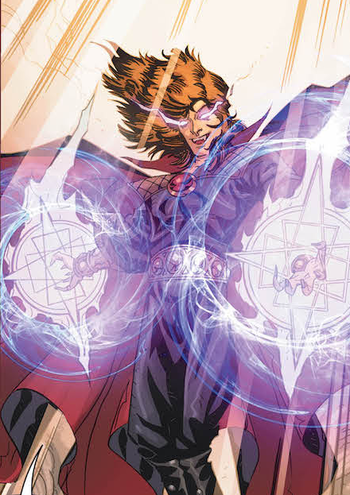 The Lord of Atlantis
Arion is a DC Comics hero and sorcerer who has stared in two of his own series while being a reoccurring character throughout The DCU, mainly having something to do with their version of Atlantis. Arion first appeared in The Warlord #55 (1982), created by Paul Kupperburg and Jan Duursema, starting out in his own series. Though it was eventually cancelled, his series and its history would be retconned into the DCU.
Advertisement:

A master of the mystic arts, Arion is a demigod born from two Atlantean gods representing light and darkness and was raised by his father, Calculha, into becoming both a savior to his nation and later a Lord of Order. Unknown to him until much later in life, he also had a brother, Garn Daanuth, who was raised by his mother, Dark Majistra. When the both of them desired to use mystical artifacts known as the Zodiac Crystals to usher in a age of dark magic, both Arion and his father battled the two. Their family feud eventually caused Majistra to be seemingly "killed", scarred Garn by draining all of his skin color, jetsonned Calculha into another dimension, and converted Arion's body energy. Using all his power, Calculha manages to save his son by sending his converted body into a star and his soul into the same dimension he was sealed within as a way to later resurrect his son. Both Calculha and Garn, survivors of the incident, would learn years later that the battle had actually caused an Ice Age that would eventually destroy the Earth. Calculha used his power and a wandering warrior by the name of Wyynde to resurrect his son. Proving himself to still be a skilled sorcerer in his new incarnation, Arion was named Lord High Mage and with Wyynde, Chian, and Mara at his side, they defended Atlantis and battled both gods and demons alike until its eventual sinking. Since then, Arion would live out his immortality acting as a Lord of Order until he eventually retired...and then got out of retirement (reluctantly) to fight evil once more until eventually having his soul expunged and body stolen by Mordru. He would have his spirit ascended to the afterlife to finally be with his family.

As of Rebirth, he is instead re-imagined to be one of Aquaman's distant ancestors, one of the first kings of Atlantis, and both a mystic and scientific genius responsible for the advance magic and science Atlantis. While a renown hero much like his Pre-Flashpoint counterpart, he instead eventually became evil and was a Big Bad in Blue Beetle.

Tropes in Arion, Lord of Atlantis

Tropes in Arion the Immortal