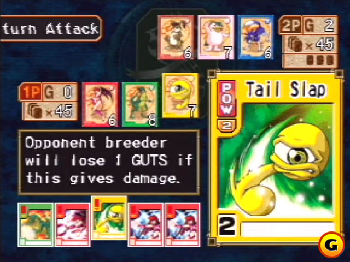 IT'S TIME FOR THE DUEL!
"The age of Monster Rancher continues...
As monster battles began to grow in popularity, kids soon realized that their smaller size made them unable to handle monsters in the same way as adults, and flocked to a certain game that suited their style. This game was safe and popular, and allowed kids to increase their knowledge of monsters. It is said that from among the game's many players emerged many fine card breeders.

While different from the previously named card games, "Monster Rancher Card Game" managed to capture pretty well the fighting system Monster Rancher games are known for. Of course, there is no breeding simulation included, but the system is still very faithful to the original games.

The rules are the following:

Exploration and story progress in the former is very similar to the Game Boy Pokémon Trading Card Game for the Game Boy Color, while the latter is more like the original Monster Rancher games, with a calendar and scheduled fights.

The Game Boy game also has gained some notoriety for its infamous awful translation.