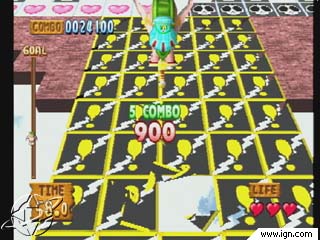 "Why, in this day and age, would someone want to make a hopping game? That's what this is, after all. You're a monster, and you hop. About. There are several things that affect the way you hop and threaten to prevent your unfettered hopping, but essentially you're still just hopping about. As hopping games go, I think this is a good one, but before that the question arises as to whether there's really a market niche for this sort of thing..."

You've to chose one of four characters, all belonging to the Big 6 from the series (Mocchi, Suezo, Golem, or Hare note Tiger and Pixie are missing) and jump from the beginning of the stage to the end line before you run out of time or lives. There are also some special blocks that have different effects, they send you foward, they give you more time, they take lives from you, etc... And that's pretty much it.

The inclusion of Monster Rancher characters was not really necessary at all, which leaves some fans to speculate that this is a Dolled-Up Installment. All and all, while the game is really simple and kind of repetitive, it can be really fun to play, specially with friends, making its dumb fun a Guilty Pleasure.

Most likely, the best thing about this game is combining the versus mode (for two players) and the create your own level.

This Game Includes Examples Of: