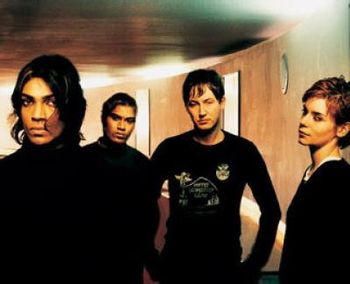 My Vitriol is a British alternative rock band consisting of Som Wardner (vocals, guitar and lyrics), Ravi Kesavaram (drums), Seth Taylor (guitar) and Laura Claire (bass), responsible for the Shoegazing resurgence of the 2000s. The band was formed in 1999 and enjoyed play on alternative and indie radio stations throughout the UK until 2001 when they landed a better recording deal.

In 2001 they released Finelines, their one and only full-length album. It met critical acclaim and showed My Vitriol as a possible contender for "Voice of a generation". Many critics and fans expected them to be propelled into a status enjoyed only by bands such as Nirvana and Radiohead. It seemed like My Vitriol had a promising career ahead of them.

Except it didn't quite turn out that way...

After their moderate UK success, they aimed for success in the United States. Anybody who knows anything about popular music history knows that in the beginning of the 2000s is just about the time real adventurous alternative music was getting zero commercial support from record companies. With the exception of the heavy-weights that made a name for themselves in the 90s, if you weren't following some type of cookie-cutter Post-Grunge or Coldplay rip-off record companies would do nothing to promote your album. So Finelines had a massive shipment to the US and it sold poorly. To make matters worse, Executive Meddling pushed for the album to be re-issued with a second disc with outtakes and B-sides, thus wasting more of the band's money.

My Vitriol, frustrated with the exhausting touring efforts to try to promote their album as best as they can, went on a hiatus that lasted 4 years. They got back together and did a tour opening for the Foo Fighters and then went back into the recording studio. They had their fanbase release a live album titled Cast In Ambers that featured a 6-minute sample of the songs that were to appear on the next album. Fan opinion was lukewarm, except for about 4 of the tracks. With the exception of those 4 tracks (which were to appear on an EP titled A Pyhrric Victory) they scrapped the album. What also didn't help was the fact that only about 7 tracks were even recorded in the first place.

Since then, the follow-up to Finelines has been in Development Hell. The band are still fondly remembered, but thanks to the huge wave of new Shoegazing artists they're lack of activity has made them somewhat of a footnote in Alternative Rock history. Strangely enough, their story marks similarities to My Bloody Valentine (namely the sparking of an interest in effects-based experimentation). My Vitriol are notable for taking Shoegazing's sound and giving it a modern, more melodic edge.

In September 2013, the band finally announced the release of their new album which was due on April 1, 2014. However, this date came and went, and the band has postponed the album to an undisclosed date and shut down fan-club updates. This has left many to believe that the band has once again failed to finish an album.

My Vitriol provide examples of the following tropes: