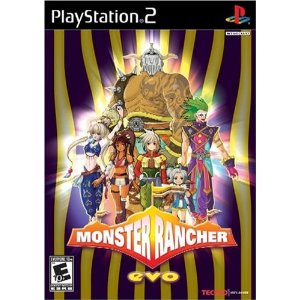 Ladies and gents, the Orcoro Circus!
In our world, creating monsters from items called "Saucers" and then raising them is a part of everyday life. We call the places where monsters are raised "Monster Rancher."
Advertisement:

And so begins the tale of Julio, your average 15-year-old Monster Breeder, and our hero in Monster Rancher EVO.

Monster Rancher EVO (Monster Farm 5: Circus Caravan in Japanese) is a bit different from older entries and later entries in that it retains 4's "raise five monsters at a time" mechanic, while being more plot heavy and traditionally RPG-ish than any predecessor. You play as the aforementioned Julio, who, in the [beginning of the game is not confident in his Breeding skills as his only monster ran away. The game begins as your circus troop of you, Albert, Marlene, and Gaufre are joined by Nayuta, who quickly demonstrates a rather unique talent, unlocking monsters from Saucers.

Armed with this ability, and Julio's Anima Recorder, you and the Orcoro Circus set out on a continent-spanning adventure, fighting stray monsters with darkened anima, unraveling each character's past, and putting on circus shows.