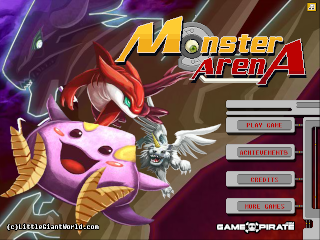 It's the year of 5180, and you have decided to become a student of the prestigious Academy of Monster Arena (AoMA). Your primary goals are very clear — learn how to raise and train monsters properly, how to live in harmony with them, and gain the coveted title of Grand Master of Monster Training. Befriend and bond with your own monster, and train it to improve its power, defense, agility and intelligence. Battle with nearby monsters who wandered into your neighborhood. Buy items with your hard-earned money that can be utilized in combat, or can assist with training your monster. Make your way up through the four ladders of the monster tournament, earn cash, defeat rivals, and become the best monster trainer that the world has ever seen.

Not to be confused with the trope, Monster Arena.