Web Video / The Legend of Zelda: The Sage of Darkness 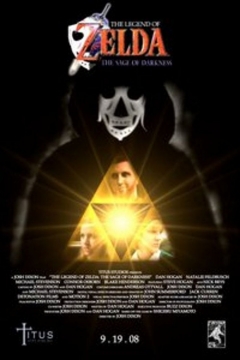 A cycle between the dark one, the princess, and the Hero of Time.
"Long ago, in the land of Hyrule... there was a legend."
—The Sage
Advertisement:

and created by Skyscape Entertainment. Released on YouTube in 2008, the film provides a somewhat extended backstory behind the frequent reincarnations of Link, Zelda, and Ganondorf.

Hyrule is in a dark time. Ertegun, the descendant of Ganondorf, has come under the influence of the mysterious and malevolent Skull Kid. They have used magic to bewitch the king and his council. Princess Zelda is the only one unaffected. She is doing her best to keep Ertegun from completely seizing the throne, but she is running out of time.

Meanwhile, Link and his younger brother Kyrin are doing everything they can to keep their farm running after the deaths of their parents. After Kyrin inadvertently draws Ertegun's attention to them, Link leaves to seek help at the castle. He meets with Zelda, and she tells him that he is the hero of time and the only one who can stop Ertegun. Though Link is only interested in protecting his family, destiny has other plans...

The creators re-uploaded the film in August 2013 with enhanced effects and various mistakes corrected, in celebration of its five-year anniversary, and again in September 2018 for its ten-year anniversary. The updated version can be found here.