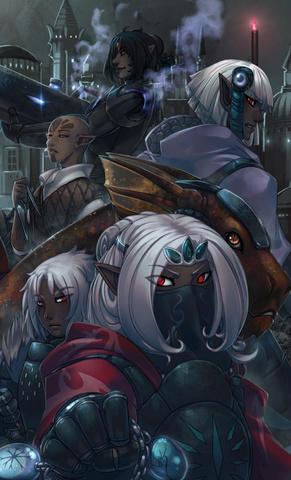 Speaking of conflicting loyalties...
"This is their tale. The world as it was through their eyes"
Advertisement:

As of 2022, Moonless Age has been completed, and a new story, Hel's Gate

, set in a different part of the same world, has begun.

Drowtales is Exactly What It Says on the Tin, and the drow and their internal conflicts and lives are the main focus, more specifically the high-tier political figures and the strife produced from their struggle for power. The various subplots offer Grey-and-Gray Morality, Black-and-White Insanity and Evil Versus Oblivion conflicts, so the work is very cynical in this regard and includes a fair share of violence, gore, angst and emotional trauma. Non-drow races had little screen-time so far and were not shown in good light either.