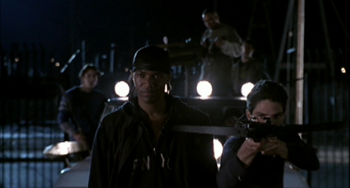 A girl named Alonna walks down the street, followed by a group of vampires, but when the vampires turn around, Alonna's brother Gunn and many others are there, armed and ready for a fight. Several are killed on both sides and in the end the vampires run off leaving the humans to deal with the wounded.

Team Angel meet multi-billionaire and prospective client David Nabbit at a party, who explains he is being blackmailed by Lenny Edwards for going to a demonic brothel called Madam Dorion's. Angel tracks down Lenny Edwards, and makes him promise he will hand over the incriminating photos the following night. Gunn, after receiving news that a vampire is near by, witnesses Angel intimidating Edwards from afar, and plots to kill Angel. David pays Angel Investigations with a very large check, and promises more when the job is done.

The next night, Angel meets with Lenny, who brought the photos and a demon security guard. Angel kills the demon and gets away with the photos. However, he gets staked in the chest by a couple of the human gang members. He is chased and forced to run through a gauntlet of vampire killing weapons. When confronted by Gunn and the others, Angel tries to explain that he is fighting for good.

Cordelia dresses Angel's wounds while they look at the graphic pictures that were being held for blackmail. Angel is still in pain, but goes off to find the nest of vampires before the gang of kids find it. Gunn questions Angel and his motivations for supposedly helping them. The vampires throw smoke bombs into the humans' hideaway, forcing them to escape to the surface. Covered in heavy clothes and wearing gas masks, the vampires capture several of the teen gang members, including Alonna.

Angel offers his assistance to Gunn and the others, but Gunn refuses and locks Angel in a meat locker. Angel tries to punch his way out of the locker, only to have Cordelia and Wesley open the door for him. Searching for the vampire's lair, Gunn finds a newly undead Alonna, but at first can't bring himself to kill what used to be his sister. When she offers to make her brother a vampire, he stakes her.

Angel kills the vampire gang leader and arranges a truce with the rest of the group: he'll allow them to live if they leave town and never return. Cordelia considers getting involved with David for his money, but ends up talking herself out of it. Angel tells Gunn he may need his help in the future.