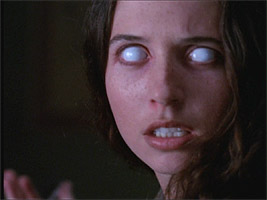 Angel is playing exterminator with some vamps in a warehouse. Once they're all dust, he hears somebody wail in pain. Inspecting the noise, Angel sees a wounded man crawling out onto the floor and collapsing. Angel examines the body, only for a woman wearing sunglasses to grab him by the throat. Her sunglasses are knocked off, and she's got spooky white corneas covering her pupils. This time, Angel's opponent effortlessly dodges his fists every time he swings, as if anticipating his movements. She manages to toss him through a wooden partition, and by the time Angel gets to his feet, she's gone.

Flash-forward to Angel's office: A frustrated Wesley shuts his Encyclopedia Demonica, having failed to dredge up any info on blind demons. Cordelia suggests he look up Helen Kellerus Homicidalus. It hits Wesley that maybe the woman isn't a demon at all—that perhaps she's merely honed her senses around her disability. Cordelia uses a search engine and pulls up one Vanessa Brewer, a blind woman who has been spotted fleeing the scenes of various homicides, and is currently on trial. It gets better: Wolfram & Hart is representing Vanessa pro bono, so she's probably working for them in some capacity.

At the trial proceedings, Lindsey MacDonald is delivering an impassioned speech on behalf of this poor, persecuted lady. Enter Angel, busting through he courtroom doors like Atticus Finch and flinging an object toward the front of the room. From her seat, Vanessa raises an arm and neatly catches her sunglasses, causing the attendees to gasp aloud. Lindsey looks less than pleased.

At the Wolfram & Hart building, Lindsey watches as Vanessa pals around with some bigwigs. Lee Mercer sneaks up from behind and offers his snide congratulations on getting Vanessa cleared on all charges. Finally, a bigwig (Holland Manners) notices Lindsey and waves for him to come over. Brief recap of how Lindsey erroneously hired Faith to kill Angel, along with a host of other screw-ups. Holland uses a plethora of menace-laden words to emphasize that the firm doesn't tolerate losers, but that despite this, he's grown fond of Lindsey. Gee, thanks. Smiling amiably, Holland pats Lindsey on the shoulder before mentioning that it would be a good idea if he invented a tragic and abusive sob story for Vanessa. Lindsey catches on that Ms. Psycho is about to commit another crime, and Holland explains that there are some children arriving in LA tomorrow that could pose a threat to them. Oh snap.

Angel is upset that Vanessa was acquitted and he can't legally testify in court. He tells Wesley he remembers living in a world like Wolfram & Hart's, where there's only power and no consequences; he misses that kind of clarity. But he doesn't miss the "killing your friends" part, Cordelia nervously chimes in. As if on cue, the door opens, and Lindsey steps into the office. He tells Angel that he "wants out" of Wolfram & Hart.

When Angel expresses skepticism at his "born again" attitude, Lindsey explains he grew up in abject poverty, and swore to himself that he'd never again— Angel acts like he's about to nod off from boredom, before snarking to Lindsey to get to the part about being evil. Lindsey reveals that Vanessa has been hired to assassinate children. Later, the group plans Angel and Lindsey's break-in at Wolfram & Hart. Lindsey plans to leave his security card for Angel to find, allowing Angel to slip into the demon-guarded vault. Lindsey suddenly remembers the firm's vampire alarms, which will go off as soon as Angel enters at the building, but Angel assures him it won't be an issue.

That night, Angel meets with Gunn, who is reluctant to help him. "Not really interested in some rich guy's heartbreak." Angel can relate, but says there are bigger things at stake. Gunn challenges Angel him to give one good reason why he should bother. Well, it'll be extremely dangerous! Gunn grins mischievously—he's in.

The next day at Wolfram & Hart, Lindsey leaves his security pass under a fire extinguisher then heads back upstairs as Angel waits for the right time to move. Gunn steps into the lobby carrying a burlap bag, distracting the guards with a hilarious rant against The Man. As the vampire alarms go off, Gunn cuts the cord holding the sack, revealing a captured vampire inside. The guards are too busy with the decoy vampire to notice that Angel is on the premises.

Angel uses the security card to open the vault, then blows some of Wesley's pink pixie dust into the guardian demon's face, causing it to stiffen into a board and fall over. He takes CDs labeled "restricted access" and is about to leave when he notices a scroll covered with symbols. Angel cannot help but feel drawn it and grabs it too. This activates another alarm and drops a grate over the door to the vault. Whoops. Angel makes like Indiana Jones and dives under it before it slams shut.

Angel phones Lindsey and tells him to get out. Unfortunately, Holland is herding everyone into a conference room for a surprise mind-reading. Lindsey fears that he’s been caught, but Holland sidesteps him and announces that Mercer is planning to jump ship to a rival firm. Lee protests his innocence, but doesn't get very far before he gets a bullet to the head. Holland laments the sad task of terminating an employee and dismisses the others—but unexpectedly asks Lindsey to stay behind. D'oh. Lee's body is dragged out the door by some guards, leaving a bloody streak behind. Holland chalks up another ruined carpet and asks Lindsey if he’s scared; Lindsey admits that he is. Holland says that's understandable, since he defected to Angel's camp, stole from the vault, tried to sabotage a case, and generally screwed Holland over. A jittery Lindsey insists that he didn’t want to lie or betray the firm, he just wanted to leave. Cryptically, Holland decides not to have Lindsey killed, instead giving him a few vacation days to contemplate his future.

Angel returns to his office and is surprised that Lindsey isn’t already there. Cordelia asks if Angel is going to go back for him, but he says that there's no point. The discs reveal that Vanessa is slated to murder three immigrant children—blind seers considered to be a powerful triumvirate. Lindsey wanders in as they mull over the details, apologizing for being late. Not bothering to glance at him, Cordy answers that they just figured he was worm food.

Vanessa arrives at a safe house, stabbing the man guarding the children with her cane. Angel tells Lindsey to get the kids out. After being thrown against a wall, Angel lies motionless on the ground and watches as for the first time Vanessa seems unable to detect him, since Angel lacks both a pulse and body temperature. Having finally realized her weakness, Angel pummels her for a bit, alternating between attacking and standing completely still, before grabbing the cane and skewering her with it.

Back at the office, Wesley tells Angel the parchment he stole from Wolfram & Hart contains the Prophecies of Aberjian (henceforth referred to as the "Shanshu Prophecy"), which mentions a vampire with a soul. Intriguing, no?

Lindsey returns to Wolfram & Hart with the disks Angel stole and apologizes to Holland, saying he did what he needed to. Holland mutters that his rescue of the children was noble, or whatever, and notes that Lindsey probably made copies of what was on the disks. He tells Lindsey that he stood up to the firm and won; the firm needs people with that kind of chutzpah. In fact, he’s giving Lindsey his old office, since Holland is getting a promotion. He tells Lindsey that it's his choice, then leaves. After pondering for a moment, Lindsay closes the doors and takes a seat at the beckoning desk of power and evilness. Lindsey gazes out the window at the city lights as Angel does the same thing elsewhere.