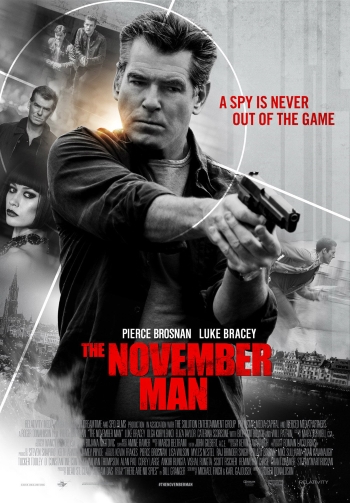 The November Man is a 2014 spy thriller film directed by Roger Donaldson and starring Pierce Brosnan. It is based off the seventh book in the series.

In 2008, Peter Devereaux (Brosnan) and David Mason (Luke Bracey) engage in a mission that leaves an innocent boy dead and Devereaux unsure of Mason's character. Five years later, Devereaux is retired until Hanley, an old agency friend of his, drops in to show him a file that contains three dead CIA agents, all supposedly the handiwork of Arkady Federov, the leading candidate for Russia's presidency. However, they have someone on the inside who has gotten close enough to uncover evidence that Federov is a war criminal, with ties to a young Chechen girl last seen with Alice Fournier (Olga Kurylenko), a social worker in Moscow.