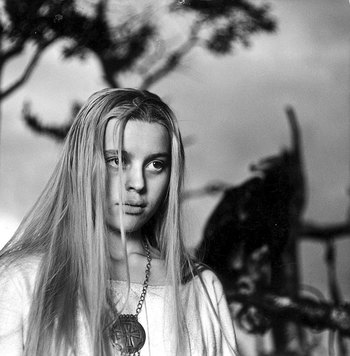 Mind Screw and High Middle Ages. Tarkovsky? Nope, Vláčil.
"This tale was told by chance, so it hardly merits praise. But that does not matter. There are many others like it still waiting to be penned."
— Opening Title Card
Advertisement:

Marketa Lazarová is a 1967 Czech historical drama film directed by František Vláčil, supposedly based on real historical events (loosely) and definitely based on a 1931 novel of the same name by Vladislav Vančura. It is often regarded by film critics to be one of the greatest Czech films ever made.

Set in the High Middle Ages, the story focuses on two rival parties, a bandit village and a passing group of German nobles. In between these two parties is the opportunistic Lazar and his daughter, Marketa, who try to find a group to take them in. The actual plot is much harder to discern and contains a liberal amount of Mind Screw.

The movie has been picked up for Blu-Ray distribution by The Criterion Collection. [1]