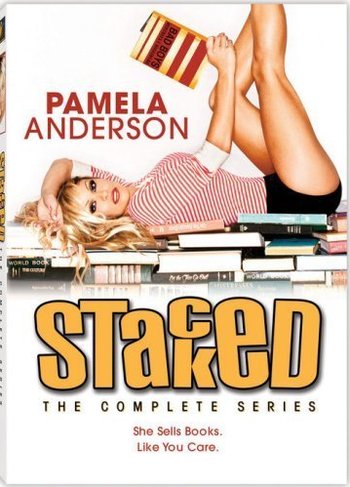 Stacked is an American sitcom that ran from April 2005 to January 2006 on Fox.

When blonde bombshell Skyler Dayton (Pamela Anderson) catches her rock star boyfriend in bed with two women, she decides that she's had enough of dating bad boys and a life of nonstop partying and wants to change her lifestyle to one that's more stable and steady. Seeking a book on relationship advice, she wanders into a small, family-owned bookstore called Stacked Books that's managed by two brothers: Gavin (Elon Gold) and Stuart (Brian Scolaro) Miller.

Stuart immediately becomes infatuated with Skyler. Gavin, however, views her as the embodiment of the shallow, vapid, image-obsessed culture he's come to loathe. Much to Gavin's horror, Stuart offers Skyler a job at the store, which she accepts as her first step towards changing her lifestyle. Other major characters include Katrina (Marissa Jaret Winokur), the cynical barista who is none too thrilled about having to work alongside an intimidating blonde beauty, and Harold March (Christopher Lloyd) a retired rocket scientist who is a regular customer at the bookstore.

Although 19 episodes were filmed, the show was canceled after only 14 episodes had aired due to low ratings. The unaired episodes were later made available on DVD.