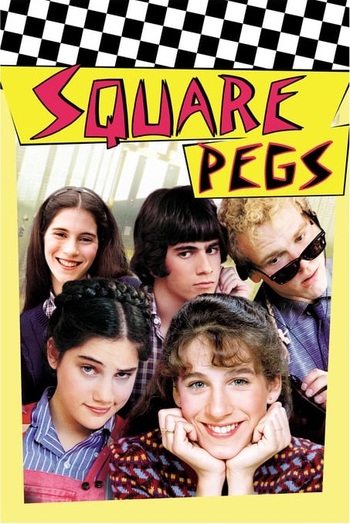 "I'd like it if they'd like us, but I don't think they like us."
Lauren: Listen, I've got this whole high school thing psyched out. It all breaks down into cliques.
Patty: Cliques?
Lauren: Yeah, you know, cliques; little in-groups of different kids. All we have to do is click with the right clique and we can finally have a social life that's worthy of us.
Patty: No way! Not even with cleavage!
Lauren: I told ya. This year we're gonna be popular!
Patty: Yeah?
Lauren: Yeah. Even if it kills us!
— Title Sequence
Advertisement:

Square Pegs is a High School sitcom on CBS from 1982 about a pair of "unpopular" teen girls, Patty and Lauren, struggling to fit in with the "popular" kids at school. Joining them in the struggle are two teen boys, Marshall (who hopes to become the Class Clown) and Johnny Slash (who happens to be talented at a lot of things but is too much of a Cloudcuckoolander to appreciate it).

Despite its very short runtime, the show retains a cult following to this day. For everyone else, it's best known for unleashing Sarah Jessica Parker on an unsuspecting populace.