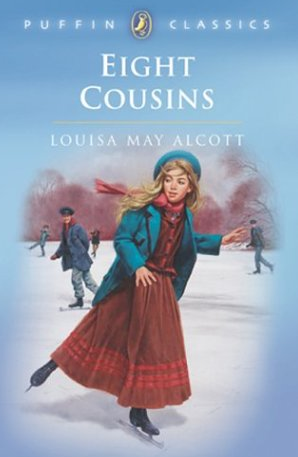 Eight Cousins and its sequel, Rose in Bloom, by Louisa May Alcott, are the Victorian novel equivalent of a Reverse Harem manga. Rose Campbell, the recently orphaned heroine, comes to live with her Uncle Alec, six opinionated aunts, and seven handsome male cousins who flock around her "like bees to their queen."

The first book deals with Rose's first year among the family, as Alec puts her through a trial period to test his views on women's health and education (which were quite ahead of their time, by the way). The second book, where 20-year-old Rose returns from a trip to Europe, settles the question of what she will do with her inherited fortune, how to hold on to the good habits Alec has taught her in the shallow world of fashion, and most importantly — for some readers, at least — which cousin she will marry.