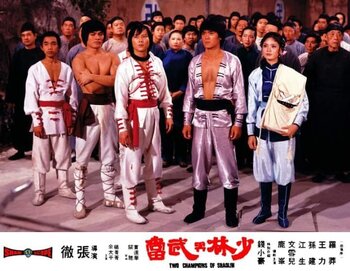 The titular heroes are the two in the center, fyi.
Advertisement:

Two Champions of Shaolin is a 1980 Martial Arts Movie directed by Chang Cheh, produced and released by Shaw Brothers as part of their series of kung-fu films starring the Venoms Mob.

The Shaolin sect have formed an underground rebellion against the tyranny of the Manchu government, but they're being hunted by traitors of the martial world - the Wu Tang clan, backed by the Manchus. When a Shaolin pupil, Tong Qian-jin (Lo Meng), seeks his fellow compatriot Hu Hui-gan in order to establish an alliance, assassins from the Wu Tang are more than eager to prevent their meeting. After their rendezvous, Tong and Hu ends up facing opposition from killers at every corner, including the boomerang-chucking mercenary Li De-zong and the notorious Manchu fighter Gao Jin-zhong (Lu Feng). Along the way, Tong ends up falling for the daughter of a fellow resistance leader...

It's worth noting that this is one of the few Venoms Mob film that doesn't feature their biggest star, Philip Kwok, although Philip did lend a hand in choreographing the numerous action scenes.