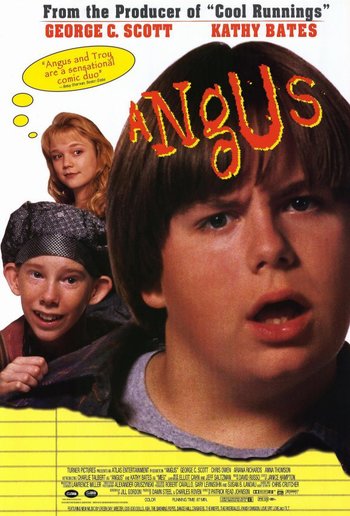 A 1995 coming-of-age teen movie based on Chris Crutcher's short story "A Brief Moment In The Life Of Angus Bethune", directed by Patrick Read Johnson and starring Charlie Talbert and a young James Van Der Beek in their first film roles.

Talbert stars as Angus Bethune, who in his own words is "a fat kid who's good at science and fair at football." He's also got a vicious rivalry with pretty-boy Jerk Jock Rick Sanford (Van Der Beek), who decides to play a cruel prank on Angus by rigging an election that nominates Angus as the Winter Ball King opposite Rick's girlfriend, Melissa LeFevre (Ariana Richards). On one hand, Angus knows he's being set up for humiliation and doesn't want to play along, but on the other hand, he's had a crush on the (in his mind) unattainable Melissa for years, leaving him unsure of what to do. Helping him along are his geeky best friend Troy (Chris Owen), his loving and slightly unorthodox mom (Kathy Bates) and his equally loving and much less orthodox grandpa, Ivan (George C. Scott).

Much like the similar Lucas, this film is one of those extremely rare teen movies starring an awkward social outcast who's not portrayed as an object of ridicule for the audience, and like Lucas, the protagonist pursues much more noble and sympathetic ends than the stock teen-flick goal of simply "getting laid." Roger Ebert loved the film for precisely these reasons.

The movie was officially unavailable on DVD for a long time, but can now be purchased as a made-to-order DVD from Warner Bros.. (who inherited the film via the Turner Broadcasting merger— it was one of Turner's few solo film productions, and was distributed in theatres by another of Turner's acquisitions, New Line Cinema).