Literature / The Crucible of Time 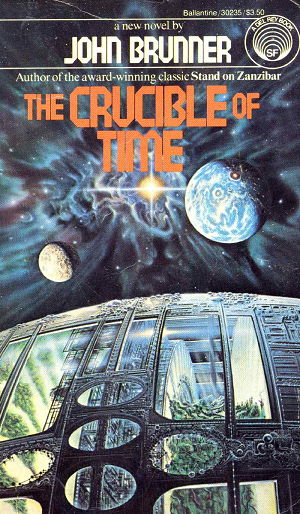 The Crucible of Time is a Science Fiction novel by John Brunner published in 1983.

The story depicts the rise of a civilization of Starfish Aliens from a primitive to a space-faring level. Living on a planet in an unstable galactic region, the aliens are regularly plagued by cosmic phenomena that lay waste to their civilization and, each time, force them to start over. The narrative focuses on their attempt, over the course of several centuries, to escape that curse by developing a scientific method and eventually expanding into space.

The early chapters focus on one of the first natural philosophers as the world is coming out of an Ice Age. He uses ancient star charts to demonstrate that stars move, contrary to religious dogma (of the skies being a cold and unchanging hell, and the the magma under the earth being a warm heavenly source of creation). He also correctly pins down the most common reasons for female infertility in their species, which leads directly to females gaining the same social status as males. (Females who didn't produce offspring were underfed and abused, which kept them infertile and unintelligent.)

The middle chapters focus on the rise of civilization. The aliens prove quite adept at breeding and domesticating species which may have been domesticated or bioengineered by older pre-disaster civilizations. There are many plant and animal species on the planet which serve useful purposes, such as great sea-beasts which are domesticated and used as ships on the ocean. There is also a species of plant which can pump water, and difficulties in breeding it to work in thin air at high altitudes (with no working theory of gas and air pressure) are addressed. They also develop large plants which produce balloons of lighter-than-air gasses, paving the way for aeronautics.

In the late chapters the aliens have finally used geology and archaeology to discover that their planet has been subject to innumerable asteroid impacts and other cosmic phenomena which destroyed prior civilizations. They discover radioactivity and genetics. They develop a space program in an effort to get off of the planet before they go extinct. In this time the planet suffers from religious fundamentalism resisting the space program and holding to the old dogma of the stars being hell.