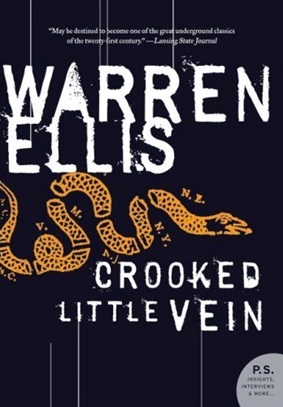 I opened my eyes to see the rat taking a piss in my coffee mug. It was a huge brown bastard; had a body like a turd with legs and beady black eyes full of secret rat knowledge.
— Michael McGill's first two sentences, setting the mood for the novel.
Advertisement:

Crooked Little Vein is the first novel by Warren Ellis, published in 2007.

Michael McGill, a burned-out Private Detective is hired by a corrupt and heroin-addicted White House Chief of Staff to find a second "secret" United States Constitution, which had been lost in a brothel by Richard Nixon. What follows is a scavenger hunt across America, exposing its weirder side along the way. McGill is joined by surreal college student side-kick and eventual lover, Trix, who is writing a thesis on sexual fetishes although the true reason why she followed him is that she desired McGill.