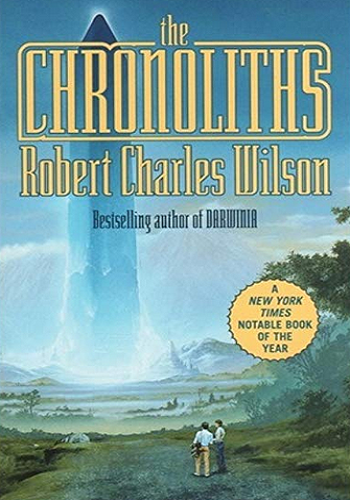 The Chronoliths is a Sci-Fi novel by American-Canadian author Robert Charles Wilson. It revolves around the sudden appearance of destructive and indestructible monuments around the world, with inscriptions that talk about military victories of someone named Kuin... dated twenty years in the future.
Advertisement:

The main characters are Scott Warden, a programmer whose life is ripped apart by events of the Chronolith appearances, Sulamith "Sue" Chopra, a scientist devoted to study them, Morris Torrance and Hitch Paley, a former criminal and a former FBI agent who aid her, Janice and Kaitlin, respectively ex-wife and daughter of Scott, Adam Mills, the main antagonist, and his mother Ashlee.