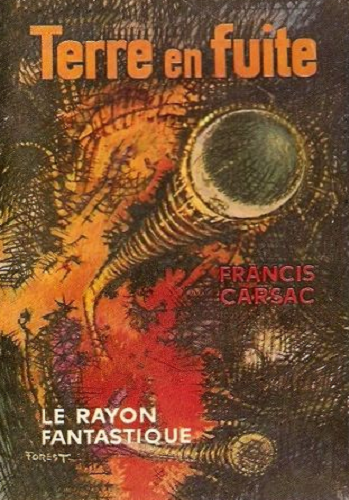 Terre en fuite (Fleeing Earth) is a 1960 science-fiction novel by the French author François Bordes under the pen name Francis Carsac. Unfortunately, the novel has never been published in English.
Advertisement:

The Framing Device of the novel is the first-person Decoy Protagonist recounting the death of a famous physicist named Paul Dupont, who has died along with his wife in laboratory explosion eleven years prior. Paul's will named the protagonist as their son Jean's custodian, giving the protagonist access to all their notes. A few years before that, the protagonist witnesses a strange event involving a purple Negative Space Wedgie striking the hydroelectric power plant where Paul (just an engineer at the time) worked. When Paul wakes up, he behaves strangely and even speaks in an unknown language for a bit. Paul Dupont becomes a world-renounced physicist, publishing groundbreaking papers that overturn the human understanding of the nature of the universe. Later, Paul explains that he is actually two people: his friend Paul Dupont and Haurk Akéran, the Supreme Coordinator in the time of the Great Twilight. Paul/Haurk claims that he is from the distant future. A few years later, the protagonist witnesses a similar Negative Space Wedgie killing Paul and his wife. The protagonist finds a package that Paul sent him before his death, detailing Haurk's story. The rest of the novel is that story.

In the story, Haurk explains that modern human civilization is approaching its end. He isn't sure how civilization falls, but before that happens, humans will explore Mars and Venus. What follows are three ice ages with relatively short breaks between them, lasting about 200,000 years. After that, humanity starts from roughly the Paleolithic levels of development, and it takes another 10 millennia to go from this state to first settlements and true civilization. Haurk is born in the year 4575 of the new era. The new humans are roughly the same but have slight neural changes that, basically, means that they don't have any stupid people (by our standards, at least). Thanks to their smarter general population and free flow of information, scientific progress runs ridiculously fast (e.g. they land on Mars and Venus only a few decades after discovering atomic power). Venus is eventually terraformed and settled. Then Earth (which the future humans call Helléra) is invaded by Starfish Aliens called Drums who crush human defenses in a matter of weeks and enslave humanity for over 1000 years. La Résistance manages to create a Synthetic Plague tailored to Drum physiology, and the surviving conquerors depart, destroying as much as they can. They do, however, leave behind the concept of "space magnets", which allow rapid sublight travel between large celestial bodies. Civilization on Earth is rebuilt with the help of the colonists on Venus (whom the Drums didn't bother conquering).

Hyperspace is discovered, but out of 16 hyperspace-capable ships sent to other stars, only one returns revealing that navigation is pretty much impossible in hyperspace, making every trip a Blind Jump. After that, interstellar travel is abandoned, especially since conventional travel using "space magnets" results in a spacecraft being stopped by a natural barrier halfway between any two stars.

Haurk explains that he becomes the head of the observatory on Mercury studying sunspots. One day, he discovers that the Sun is going to explode in 10 years. Less than a year later, he is made Supreme Coordinator of a newly-created organization whose goal is to construct gigantic "space magnets" on the poles of Earth and Venus in order to move the planets beyond Pluto's orbit to wait out the solar explosion, using the resources of all of humanity. Then another scientist named Kelbic reveals that not only will the solar explosion reach much farther than Pluto, but the Sun will become a black dwarf after that. As such, the only option is to take the two Planet Spaceships to the nearest star Etanor (presumably Proxima Centauri). The mass of the planets (plus the Moon) is enough to punch through the interstellar barrier.

Earth and Venus are slowly shifted from their orbits and begin to head to Etanor. Six months before the expected deadline, Haurk discovers that the Sun will explode in two weeks. An archaeologist named Klobor discovers an alien spacecraft under the surface of Mars and chooses to stay behind, studying the craft's engines and transmitting results until the planet is consumed by the solar fire. The two planets manage to escape and continue on their journey. This journey, taking 15 years, is called the Great Twilight. After finally reaching Etanor, the humans find out that the system is inhabited. A human Lost Colony exists on one of the planets (called Tilia) in the system, who are at war with Human Aliens called the Triis from the neighboring planet Kaleb. The Tilians refuse their Earth and Venus cousins permission to stay, claiming that there is always a chance that the far numerous Earthlings and Venusians may one day try to eliminate the Tilians. A militant culture, the Tilians can't afford to take this chance. They recommend that the planets continue to a star called Belul two light years away (there is no such star in Real Life, the closest candidate would be Luhman 16 at 3.6-ly which wasn't discovered until 2009). In exchange for weapons and literary texts, the Tilians agree to send some of their warriors to accompany Earth, as they have previously received messages from Belul indicating a hostile Lost Colony.

In the meantime, Kelbic figures out the function of a strange circuit aboard the reconstructed Martian ship. It's a Time Travel device, allowing ancient Martians to safely explore other stars using hyperspace by using the circuit to jump to a time period when the barrier wasn't there. As the planets cross the barrier between Etanor and Belul, Earth is attacked by a number of fusion Space Mines. Kelbic takes three ships and flies ahead to scout out the Belul system. They are attacked, and two of the ships are destroyed. Kelbic is captured by the local humans and a red-skinned three-eyed Human Alien. The local humans claim that Earth exiled their ancestors and assume that Earthlings have arrived to conquer Belul. Kelbic is taken to a fortress, which is then attacked by a large Earth fleet. Opposed by local humans and the three-eyed Telbirians, the troops manage to rescue Kelbic. They find out that the Telbirians have Psychic Powers that allow them to place humans under More than Mind Control. The controlled humans think that they're in charge and forget all about their true masters if captured. Using a memory-retrieval device on one of the captives, Haurk is able to find out that the Telbirians (actually called R’hneh’er) were a primitive tribe on Telbir until the human colonists began to use them as servant. Learning from humans, the R’hneh’er eventually rose up and took over. They use humans to develop technology and eat those who are too weak or stupid. Kelbic manages to weaponize the memory-retrieval device to work at a distance. After a number of Space Battles, the device is used to get the enemy fleet to perform a Heel–Face Turn (any R’hneh’er aboard are usually killed by their former slaves in the first few seconds). After the device is used on Telbir, the Telbirian humans massacre the R’hneh’er. Earthlings manage to save only about 20,000 and relocate them to an outer planet. The grateful Telbirian humans ask to be allowed to join the Earth-Venus union, and the two spaceship planets are slowly placed into stable orbits around Belul.

The story ends with Haurk explaining that his experiments with the temporal circuit is what caused him to be sent back in time. In his notes, he resolves to try to recreate the experiment to send his consciousness forward into his own body.