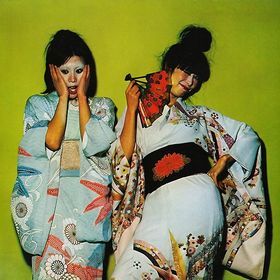 "Today I bought the album of the year. I feel I can say this without expecting several letters saying I'm talking rubbish. The album is Kimono My House by Sparks."
— Morrissey, in a letter to the NME in 1974
Advertisement:

Kimono My House is the third album by American Rock band Sparks, released in 1974 and considered one of their defining statements.

Kimono was their first album after moving from Los Angeles to England to take advantage of their growing European fanbase - the brothers Ron and Russell Mael left behind their bandmates and formed a new group with English musicians: guitarist Adrian Fisher, bassist Martin Gordon, and drummer Norman "Dinky" Diamond. Their eclectic mix of genres tightened to a neo-classical, arty Glam Rock that resonated with UK listeners, and it became their first and biggest hit album. According to producer Muff Winwood, Elton John bet against Winwood that the single "This Town Ain't Big Enough for Both of Us" wouldn't become a top 5 hit; not only did he lose the bet with it going straight to #2, but it went on to be the band's Signature Song for their entire career and spawned countless cover versions. The second single "Amateur Hour" also reached the top 10 in England, and both singles reached #12 in Germany.

The band would continue this Anglophile Glam Rock sound for two more albums before their popularity waned. They returned to America in 1976 and attempted a West Coast sound to build a new fanbase, but this too failed to stick. They would not return to critical or chart success until 1979, when they would team up with legendary producer Giorgio Moroder and transition their style to Synth-Pop Disco for No. 1 in Heaven, setting a new blueprint for both their career for the next several decades and Electronic Music as a whole.

These Tropes Ain't Big Enough for the Both of Us: