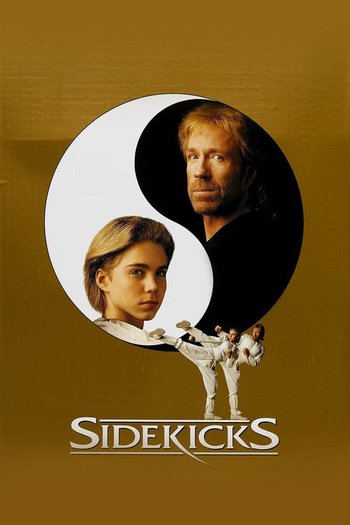 Sidekicks is a 1992 film about a kid named Barry Gabrewski (Jonathan Brandis) who has asthma. He has a lot of daydreams about being Chuck Norris' sidekick, the two of them battling against Norris' movie enemies who are often personified by Barry's school bullies. He lives with his widower father Jerry Gabrewski (Beau Bridges).

Barry is taught martial arts by an old Chinese man called Mr. Lee (Mako), the sly uncle of his teacher Ms. Noreen Chan (Julia Nickson-Soul). Mr. Lee decides to teach Barry some martial arts so that he can defend himself from the bullies, foremost among those being Randy Cellini (John Buchanan). Barry later enters a tournament where he confronts his bullies and gets to fight alongside Chuck Norris after all.

Not to be confused with the comic Sidekick, or the 1974 movie starring Larry Hagman and Louis Gossett Jr..