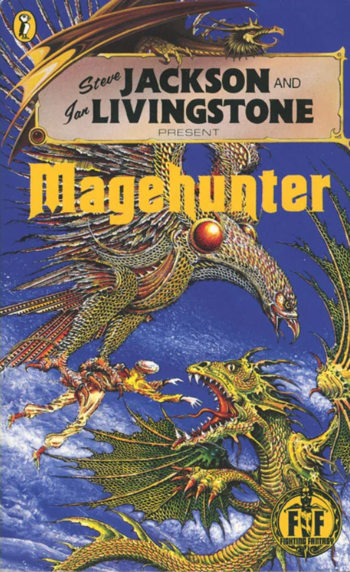 You officially chose the wrong day to fly!
"Under the patronage of the Margrave Mechtner, you have become the foremost Magehunter of your age. Orayan the Summoner of Demons, Yurial of Rachsburg, Salome the Warlock's Bride — these notorious sorcerers, and many others, have fallen to you."
Advertisement:

Magehunter is the 57th entry in the Fighting Fantasy series of gamebooks, written by Paul Mason, and is a standalone sequel to Slaves of the Abyss.

Returning to Kallamehr, the FF-verse's Fantasy Counterpart Culture to Ancient Persia, this time the hero — YOU — are the titular Magehunter, hunter and pursuer of sorcerors and magicians, who hails from a world where magic is real and dangerous. Transported through a portal to Kallamehr by your ex-captive- Mencius, who wants to claim the bounty on your head- you must hunt him down and find a way to return to your own world.

Besides your broadsword, you are also equipped with your trusty flintlock pistol, and you will need both your weapons and wits to stay ahead of cunning, magical foes in the mystical land of Kallamehr.

In addition to your usual stats, the adventure sheet of Magehunter also provides you with an extra COMPANION box; as the adventure goes on, you'll find out soon enough that you're not the only one with a score to settle with Mencius. The problem though, is that... will you and your fellow companion, which you're reluctantly stuck with, complete this adventure... without killing each other?