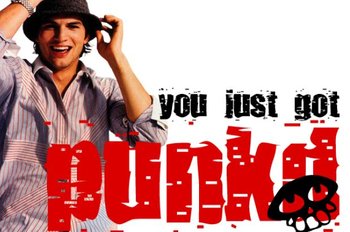 "Ashton Kutcher, the famous actor and professional manchild, hosted MTV's Punk'd, a hidden camera show where a team of terrible actors attempted to inflict emotional damage on unsuspecting celebrities, usually by pretending to do something horrible to a stranger and then blaming it on the person being pranked. Sounds hilarious, right? It's as if the creator had seen Homer Simpson 'prank' Ned Flanders into thinking his family had been killed, but he didn't get the joke."
— WrestleCrap, "Induction: WWE Wrestlers on Punk'd – So named because "Jackass" was already taken"

A Candid Camera Prank-type Reality TV show (2003-2007; 2012) airing on MTV, first hosted by Ashton Kutcher and then, in the Revival in 2012, by a series of celebrity hosts for each episode. It focused on pranking celebrities, with varying reactions from temper tantrums to tears.