Film / The Chant of Jimmie Blacksmith 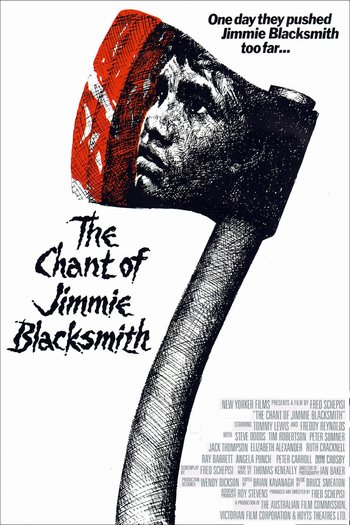 The Chant of Jimmie Blacksmith is a 1978 Australian film about a half-Aboriginal half-white lad, the titular Jimmie Blacksmith. He is educated in Christian spirit by a priest and his wife and then let out in the world to find good job and marry a white girl so that his kid would be already a quarteron and, as both Jimmie himself and the priest couple think, would be much better for that.

Jimmie starts to make fences for white farmers however he is regularly mistreated and underpayed, never receiving the due wages for his work. Jimmie lives within his tribe whose members are not eager to work as opposed to him and strip him of his hard-earened money. Later he leaves his settlement and finds job with an abusive law enforcement officer becoming his aide. However soon after a heinous deed by that officer he quits the police service.

Then Jimmie resumes making fences and for a change starts to work on the order of the seemingly kinder master. He also marries a white girl of somewhat light morals which soon gets pregnant. However after the baby is born and it turns out that it is completely white as she was impregnated by a man whom she met before she got into relation with Jimmie the things make a turn for worse. Also his three relations from the tribe including his uncle and brother arrive to the farm where Jimmie works to the great discontelt of the previously benevolent farmer who was quite eager to put up with the one relatively light-skinned and industrious Aboriginal but has no use for other three idle visitors.

So one hour into the film events take a much darker turn which is even a bit unpredictable.