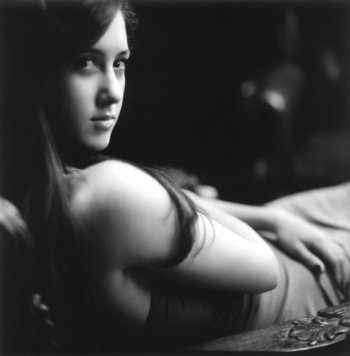 If I could fall into the sky,
Do you think time would pass me by?
'Cause you know I'd walk a thousand miles,
If I could just see you...
Tonight.
"A Thousand Miles"
Advertisement:

Vanessa Lee Carlton (born August 16, 1980) is an American singer-songwriter who first came to prominence in 2002 with her runaway hit single, "A Thousand Miles". The song was heard literally everywhere after that, becoming a theme for the early 2000s and the new emerging sound at the time. Along with Michelle Branch and Avril Lavigne, she was one of the teen artists marketed as the "Anti-Britney", a movement which went against the perceived artificiality of pop music at the time by emphasizing singers who could also write their own tunes and in her case, play the pianonote Mel Campbell has an in-depth essay on the culture of the time

. She gained a major following of loyal Nessaholics for this reason. However, her mainstream popularity was already beginning to wane, as her next single, Ordinary Day, only managed to reach top 30 in the charts.

Ironically, her "real artist" persona led to the commercial disappointment of her next album, Harmonium, which introduced darker themes while maintaining a personal feel. Her label A&M Records lacked confidence in her nonconformist attitude towards the album and thus gave it little promotion, with only one single, "White Houses", barely making any fanfare. Many critics at this point wrote her off as a One-Hit Wonder gimmick, though she still maintained a loyal fanbase. This included Stevie Nicks, with whom she became friends with after she supported her on tour and continued to assist with production long after.

Her clash with A&M Records led her to abandon it for the more bohemian The Inc. Records to produce "Heroes & Thieves", an album she made with a more mature perspective in mind. Despite a positive critical response, it was again a commercial failure despite her music being featured on Gossip Girl. At this point, she was unsure if she wanted to make another record.

She eventually recorded "Rabbits on the Run" in Peter Gabriel's "Real World Studios" in the UK. Drawing inspiration from Stephen Hawking and Watership Down and featuring the Capital Children's Choir, the album features minimal production values and a more atmospheric sound. It was eventually released on indie label Razor & Tie and is regarded as the purest expression of herself by her fanbase due to the lack of label pressures.

Ultimately, she showed that she was indeed an artist true to herself regardless of industry and critical opinion, and though she is nowhere near as ubiquitous as she once was, she maintains a dedicated fan following to this day.

Her music provides examples of: