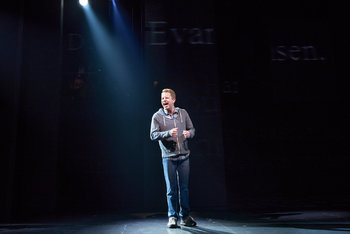 ♫ Words fail, words fail
There's nothing I can say. ♫
♫ We start with stars in our eyes
We start believing that we belong
But every sun doesn't rise
And no one tells you where you went wrong! ♫
— "Waving Through a Window"
Advertisement:

Dear Evan Hansen is the prime contender for the saddest musical ever made, and it really shows.