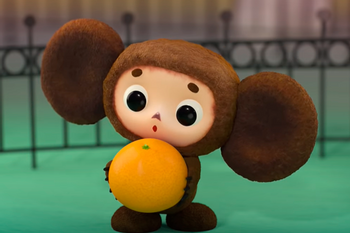 Soviet series of books by Eduard Uspensky and animated puppet stop-motion shorts about Cheburashka, critter of ambiguous nature who is a friend of Gena The Crocodile who works in a zoo (as a crocodile).
Advertisement:

The original four shorts are available with English subtitles on Youtube:

Book and shorts provide examples of: