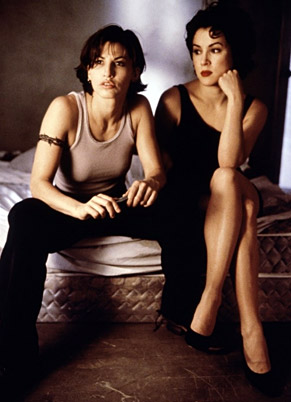 For money. For murder. For each other.
Advertisement:

Bound is a 1996 independent crime thriller directed by The Wachowskis. It is about Violet (Jennifer Tilly), a closeted lesbian prostitute and mob moll who longs to escape her relationship with mob money-launderer Caesar (Joe Pantoliano). When she meets ex-con Corky (Gina Gershon) hired to renovate the next-door apartment, the two women hatch a scheme to steal $2 million of Mafia money. Though the film was a strong freshman effort by the Wachowskis and a terrifically tense thriller, arguably most people remember it for the lesbian sex scene.