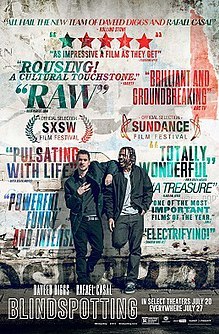 "You are a convicted felon, Mr. Hoskins. You are now that until proven otherwise. Prove otherwise at all times,"
Collin: Why blindspotting?
Val: 'Cause it's all about how you can look at something and there can be another thing there that you aren't seeing. So, you got a blind spot.
Collin: But, if someone points out the other picture, doesn't that make it not a blind spot anymore?
Val: No, because you can't go against what your brain wants to see first [...]
Advertisement:
Collin: When you look at me now, do you always see the fight first?

Blindspotting is a buddy dramedy that is as much a story of its setting, the city of Oakland, as it is its two central characters, Collin Hoskins and Miles Turner. After getting released on probation, Collin, played by Daveed Diggs, finds work with his old best friend Miles, played by Rafael Casal, as a mover. However, this grants them a front row seat to the gentrification of the city that raised them, as both this and the growing Black Lives Matter Movement begin to pull at their friendship. Written by Diggs and Casal, and directed by Carlos López Estrada, what follows is a raw loveletter to their city in all its tense duality.

A spinoff series of the same name, focused on Jasmine Cephas Jones' character Ashley from the original film, premiered on Starz in June 2021. Casal and Diggs return as creators and writers, with Casal reprising his role as Miles.