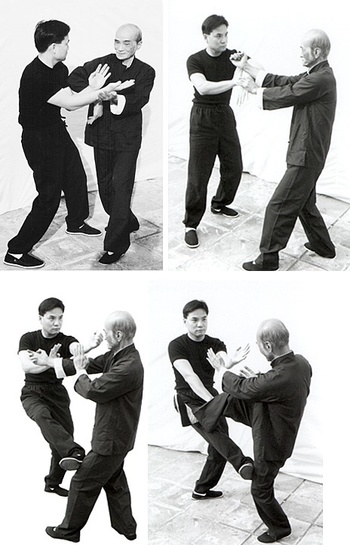 Wing Chun, also romanised as Ving Tsun or Wing Tsun (Traditional Chinese: 詠春, Simplified Chinese 咏春; pinyin: Yǒng Chūn), is a Chinese martial art and stye of kung fu that utilizes both striking and trapping while specializing in close-range combat. It has the distinction of being of the rare martial art styles, if not the only martial art style that was invented by a woman.

Wing Chun is characterized by using long, harmonious chains of blocks and Rapid-Fire Fisticuffs in a very straight line with little footwork. It does a great emphasis in a vertical posture in which hand strikes are expected to be deflected and chained into the user's own attacks, and like most Southern kung fu styles, kicks are actually rarely used and always kept in low angles. By this and other reasons, Wing Chun could be considered the conceptual paradigm of Southern kung fu, and is by a wide margin its most trained style. It is a staple of Hong Kong action cinema choreography due to its visual finesse and complexity, which helps picture an user as an elegant and technical yet aggressive fighter, and also because its hand movements transition pretty well to Gun Fu. The art also trains the use of weapons like poles and short swords.

While one of the most popular styles of kung fu around, Wing Chun is perhaps one of the most controversial martial arts in real life. It is frequently accused of being based on impractical training methods and containing an excessive emphasis in unrealistic concepts over real applications, and this extends not only to the art's methodology, but also to its very core principles - turning into a moot point when it's argued that these traits, wrong or not, are precisely what make Wing Chun the way it is. Wing Chun also carries the stigma of being a heavy case of both Complexity Addiction and Crippling Overspecialization even inside the kung fu community, which is to say something given that most traditional kung fu styles are accused of those same flaws. These notes are a guranteedly polarizing topic of conversation in real life, as the wing chun community is known to be a very traditional, almost evangelically zealous body, which has given out too many flame wars in internet.

Tropes that are present in Wing Chun:

It is worth noting that a majority of Hong Kong action film community members (artists, choreographers, stunt people) are familiar if not proficient with the style, both men and women alike.