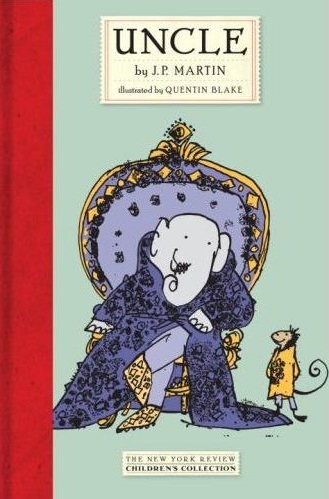 A series of six children's novels by English author J.P. Martin, illustrated by Quentin Blake. The series chronicles the adventures of Uncle, an extremely wealthy yet kindhearted elephant who wears a purple dressing gown and lives in Homeward, which resembles more of a city than a house, with great clusters of towers and skyscrapers connected by railway-lines, stairs and quirky transport mechanisms. Uncle is often accompanied by The Old Monkey, Goodman the Cat and Cowgill the Mechanic, among others.

Across the moat from Homeward is Badfort, a tumbledown fortress populated by a group of thugs called The Badfort Crowd. The Badfort Crowd constantly plot against Uncle, their schemes ranging from elaborate pranks to plots to kill him. The stories typically feature Uncle exploring new towers and regions of his castle, visiting the nearby Badgertown, and leading his friends into battle against The Badfort Crowd.

The first two books were reprinted in a facsimile hardback edition by the New York Review of Books in 2007 and again in 2009. In March 2013, a Kickstarter campaign was announced to reprint all six Uncle books in an omnibus edition. The reprint had the support of — and added material from — several authors and illustrators, including Neil Gaiman, Garth Nix, David Langford, Justin Pollard, Martin Rowson, Andy Riley, Will Self, Kate Summerscale, and Richard Ingrams. The campaign was fully funded in a little over four hours, and the book was published on 31 October 2013 under the title of The Complete Uncle. The series has been published around the world in six languages, with a Chinese version in the works.

Tropes featured in the books include: