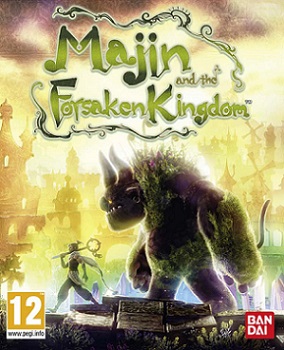 Majin and the Forsaken Kingdom is a 2010 video game developed by Game Republic and published by Namco Bandai Games.

It tells the story of the once prosperous Kingdom of Q'umarkaj as it faces being slowly devoured by an entity known only as "the Darkness", a seemingly unstoppable army of its monstrous minions waging war on every living thing. For over a century, its evil has spread unchallenged. Corrupting everything they touch, they have driven most of civilization to the outskirts of the kingdom and show no signs of relenting.

Faced with the Darkness destroying his forest home and his animal friends, a young thief enters the long abandoned heart of the Kingdom with the intention of ending the threat once and for all. To this end, he seeks out the Majin, legendary guardian of the Kingdom's founder, whom it's rumored is the only creature capable of actually harming the Darkness. However, unable to kill the Majin outright, the forces of the Darkness instead imprisoned him and stripped him of his power, spreading it throughout the ruins of the kingdom in the form of magical fruit.

And so the Thief and the Majin, or rather Tepeu and Teotl, set out on a quest to restore its power and defeat the darkness.

The game is a mix of action platforming and puzzles that require creative use of the Majin's huge strength. It also throws in some stealth elements in areas the Majin is too big to follow you into, though it's rarely necessary to rely on stealth.

Majin and the Forsaken Kingdom contains examples of the following tropes: