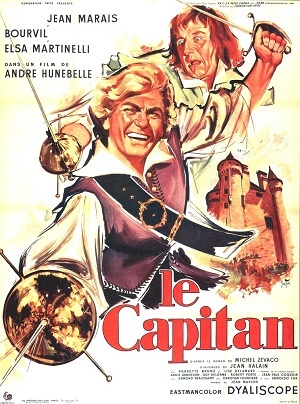 Le Capitan (English title: Captain Blood) is a 1960 French swashbuckler film directed by André Hunebelle, starring Jean Marais, Bourvil (the second time in a row with the two of them after Le Bossu), Elsa Martinelli, Arnoldo Foà, Guy Delorme and Christian Fourcade. It is based on the eponymous novel by Michel Zévaco.

In the year 1616, 15-year old king Louis XIII (Fourcade) is surrounded and kept away from power by his mother Marie de Medici and her favorite, minister and marshal Concino Concini (Foà), who plans to usurp the throne. The chevalier (knight) François de Capestang (Marais) witnesses the murder of his friend, the Marquis de Teynac, by Rinaldo (Delorme), Concini's main henchman, who has been tasked to eliminate all influent nobles who could stand in Concini's way up to the throne. Capestang is saved just in time by Gisèle (Martinelli), the daughter of Duke Charles d'Angoulême, who conspires with many nobles against both Concini and the king.

Now working to unmask Concini's sinister scheme, Capestang will do his best to protect both the king and Gisèle, who he has fallen in love with, with the help of Cogolin (Bourvil), a jester whose life he saved.