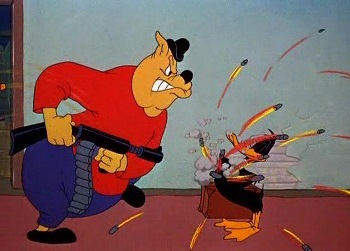 "The Stupor Salesman" is a 1948 Looney Tunes short directed by Art Davis. The thuggish crook Slug McSlug, having just pulled a robbery, conceals himself in a secluded cabin. However, he didn't count on Daffy Duck as a traveling salesman who won't take "no" for an answer.

"The Stupor Salesman" provides examples of: