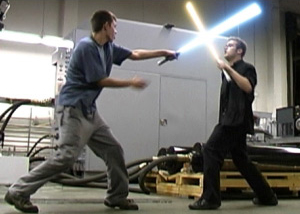 Ryan Wieber and Michael "Dorkman" Scott, both considering a submission to the very first Lightsaber Choreography Competition at the forums of TheForce.net,

a Star Wars Fan Site, developed a rivalry over which of them was the better lightsaber artist. The two met in the real world to hash out said rivalry. "Ryan vs. Dorkman"

Ryan vs Dorkman is a 2003 Star Wars Fan Film which depicts a lightsaber duel to the death between the titular rivals. RvD (as it is colloquially known) stands apart from other Star Wars fan films in that there is not even the slightest pretense of a story or plot; it is the standard fan film lightsaber duel, distilled down to its very essence and made into its own raison d'etre. As such, there are no Star Wars locations or characters or even costumes; Ryan and Dorkman wear normal real world clothing and battle in real world locations, with the only nod to Star Wars being that they use lightsabers (and a little bit of The Force).

A couple years later came the rematch: Ryan vs Dorkman 2. The sequel is, in practically every way, bigger and arguably better than the original — it's longer, Darker and Edgier, with better effects work and tighter choreography; it has a full crew, using professional grade High Definition equipment; it even has an entirely original score. Submitted to Lightsaber Choreography Competition 3, it won in a landslide. The films' special effects (put together by Wieber and Scott themselves, along with the film editing and fight choreography) were highly praised, even leading into a successful (and award winning) FX career for Wieber.

The pair have expressed interest in continuing the series, but were holding off until they could think of new and creative ways to continue the Sequel Escalation; plans were further put on hold when Dorkman was struck by a car in 2014; he suffered significant physical and neurological damage, and, as of this writing three years later, has not fully overcome his injuries. In the meantime, these films are free to watch / download from the official RvD website.

Ryan Wieber has also gone on to work with Brandon Flyte, another lightsaber enthusiast, in the similarly named and similarly styled Ryan

shorts. Both won their LCC years.

In true Star Wars fashion, the original RvD was remastered by Wieber himself. The effects were updated and uploaded on a higher quality video transfer, as the original was heavily compressed for internet distribution. Wieber also gives a rundown of the changes on the website.