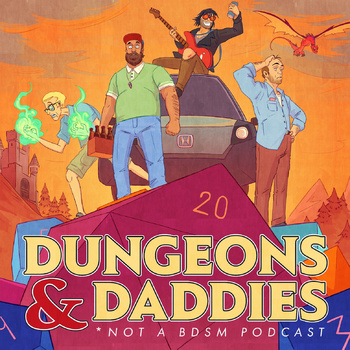 A hippie, a drugged-out rock star, an overly-friendly coach, and an emotionally distant stepfather, all armed with mystical powers...What Could Possibly Go Wrong??
Advertisement:

Dungeons and Daddies is a live Dungeons and Daddies drama/comedy Actual Play podcast started in 2019, hosted by Freddie Wong as Glenn Close, Will Campos as Henry Oak, Matt Arnold as Darryl Wilson, Beth May as Ron Stampler, and Anthony Burch as the DM (Daddy Master).

The series follows four fathers who wind up being sucked into a mystical and forgotten realm after taking their sons to soccer practice one quiet morning. Separated from their children and armed with very little knowledge or the world around them or their own newfound powers, the four fathers set off in their mini-van on a quest to find and rescue their children and perhaps even become better people.

Not to be confused with "Those" kinds of Daddies.

There was a time when you could read between the lines. No they never brought you down.